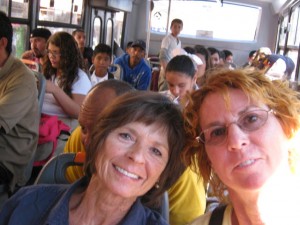 My friend Nadine has the craziest ideas. Her latest one was to get on a bus to Guaymas and then get on other buses while in Guaymas to see the surrounding neighborhoods. Well, with me with a sprained ankle, I decided now was a good time to let her drag me along.

We got on the ‘Guaymas Centro’ bus at the bus stop outside of Condos Triana at 10 am on Wednesday. The fare was 12 pesos and the drivers make change. This bus took us into Guaymas, down Serdan, past the Guaymas marina, up to Calle Lopez, and to Fatima where the bus turned around. This was our first quizzical look from the bus driver saying with his expression ‘why haven’t you gotten off my bus?’ We explained in our broken Spanish that we wanted to return to Guaymas Centro. With a smile he just shook his head ‘ok’. When the bus stopped behind the Centro Mercado in downtown Guaymas, we got off.

After looking at several buses and their destination (of which we knew none of) we took a bus indicating it was going to ‘Independencia’. This buses fare was 5.50 pesos and took us past the baseball stadium and into the neighborhoods to the side and in front of the stadium. We quickly learn that to notify the driver of your stop you shout out “paré!”. All of these roads were dirt and badly rutted. We were glad the seats in this bus were padded. At one point we notice a person along the bus route with a clipboard. We deduce that these are workers who monitor the time the buses make their route in. Interesting….who would have thought they would do this in Mexico? Again, at the end of the line when we were the only two persons on the bus, we said that we wanted to return to the Central Mercado and the bus driver just smiled at us.

Upon returning to the Central Mercado we then boarded a bus going to ‘Guaymas Norte’. This bus fare is also 5.50 pesos. It is now approximately 1:30 pm and the bus stop area behind the Central Mercado is packed with people, mostly students getting out of school. We manage to get on the bus, standing room only, and a few students (Paola, Mimi, and Adriana) quickly start practicing their English with us asking us questions about where we live and why we live in Mexico. We practice our Spanish and answer them. Paola shows us her English homework and asks us for our Facebook addresses. This bus travels back to the prison and then along several streets in front of the prison. We start heading back to Guaymas Centro and get off at Walmart.

After a much enjoyed ice cream we board the bus to ‘San Carlos’, 12 peso fare, and return back to San Carlos at 3 pm. Nadine and I have agreed that there are at least 3 more neighborhood buses that we would like to take and we will return to do this in the near future. As a way into Guaymas without having to worry about traffic or parking, the bus is a pretty good way to travel. No a/c though so keep this in mind as our weather warms up. Happy busing.