Posted in Plants and Wildlife 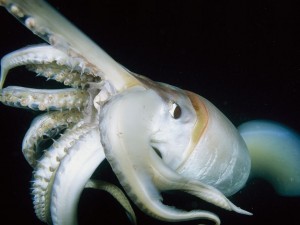 A couple of years ago I introduced Dr. Bill Gilly to an attentive group of San Carlosians who assembled for a Project Discovery® program on marine biodiversity, focusing on Homboldt (Giant) Squid — and the squids interaction with our local whale population. I should have known better to be talking with Gilly about squid at dinner time… Dr. Gilly is a serious scientist from Stanford University, but he has a slightly bent personality which jibes nicely with mine. Twisted, ever so slightly. Together we are dangerous to those around us who take science too seriously. But I digress.

You probably have seen Dr. Gilly on television on The National Geographic Channel, or Animal Planet, or Nature, whatever. He is always there blabbing his point of view about Homboldt Squid and how good they taste to anyone who cares. I, for one, certainly do not care. But Bill is my friend.

On this particular evening not long ago right here in San Carlos, we both drove the science discussion into a ditch. I baited him with some newly found recipes for cooking squid as I had just come from the Guaymasʼ Squid Festival and had eaten my way through several kilos of the stuff. He took the bait and began trying to out-do me with HIS favorite ways to cook, and eat, squid. I countered with a pamphlet I bought from a local Guaymas chef about “21 ways to cook squid.” Well, science went into the toilet, and most of my audience walked out of my lecture, as usual.

But right now, this very same debate is making headlines in Scientific American, right? The prestigious Scientific American Magazine. Bill really stepped in it this time. He has the scientific community in an uproar tonight about eating what he studies. I love this, of course. Here is a link to what happens when a couple of science-loving guys relax the reins a little too much. This story just broke, and is gaining speed. by Mark Morelli of Ocean Camp San Carlos 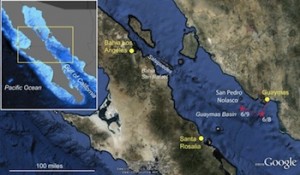 By William Gilly
Editor’s Note: Marine biologist William Gilly embarked on a new expedition to study jumbo squid in the Gulf of California on the National Science Foundation-funded research vessel New Horizon. This is his second blog post about the trip.

SEA OF CORTEZ— As we moved up the Gulf towards Guaymas, we continued to prepare our equipment. Actually, this will be a never-ending focus for the next two weeks. A research cruise in most cases is a creation in progress, and ‘equipment’ in our case ranges from Brad Seibel’s industrial-scale plumbing system for keeping big squid alive during experiments to our collection of fishing gear to catch squid. Everything will need constant, meticulous attention.

We arrived in Guaymas mid-afternoon and collected the rest of our party by 7 pm and immediately headed out to deep water about 10 miles offshore for our first exploratory squid jigging session. We arrived around 10:00 pm at the chosen site where a finger-like canyon poked back toward Guaymas. We immediately began to catch squid, and this had a predictable effect. We believe that catching a squid automatically triggers joyful exuberance. We have seen this phenomenon hundreds of times over the last decade. If there is photo of someone frowning while holding up a squid for the camera, we would like to see it. We doubt such an image exists. (read the full Scientific American Blog).

But before you just click-off, look at the early feedback! The debate rages on.