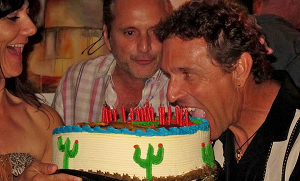 My favorite Mexican birthday tradition is “la mordida,” when the birthday girl or boy’s hands are tied behind their back and their face is shoved into the cake for them to take the first bite, whilst everyone around them shouts “Mordida! Mordida! Mordida!” Note that Mexican cakes, typically tres leches, are pretty creamy. “Mordida” is the Spanish word for a bribe, but this colloquial term is widely used in birthday celebrations with the connotation, “taking a bite”.

Mexico is one of the few Latin countries with a birthday song that’s not simply a Spanish adaptation of “Happy Birthday”. Las Mañanitas (the Little Mornings) song describes the beauty of the morning in which the singer comes to congratulate the birthday boy or girl. Before, it was only sung in the morning; nowadays, it can be sung at any time, usually when the candles have been lit on the birthday cake. And if you’re lucky, you’ll get a mariachi band’s rendition, such as this one (watch the video below).

Besides lots of food and drink, many Mexican birthday parties are also celebrated with a piñata. The piñata is most often made out of paper mache and is decorated to look like a particularly festive object or animal. It symbolizes happiness and joy and is therefore crafted with bright colors and filled with candies, treats, and small toys. Party goers are blind-folded and take turns trying to hit and break open the piñata in order to enjoy its spoils. Everyone watching sings The Piñata Song: “Dale, Dale, Dale” (see the lyrics below).

Another Mexican Birthday Tradition is La Quinceañera. La Quinceañera marks the 15th birthday of a girl and it is celebrated with the utmost pomp and joy. The birthday girl is decked up in fancy clothes, jewelry and makeup. It’s a grand celebration that follows a Thanksgiving mass (Misa de acción de gracia). She is accompanied by her parents and is made to sit down at the altar. She is also attended by a maid of honor, friends and family members. They all commemorate her womanhood, while she pays homage to Virgin Mary with flowers and bouquets. This is a special event in the life of a Mexican girl when she reaches fifteen. From an Anglo perspective, the festival would seem like a combination of a “sweet sixteen” birthday party combined with a coming out ball for debutantes.

In former times, the wealthy used to provide a trip to Europe for their young lady, frequently to Paris. Today, lavish presents to help the birthday girl in her transitions to school, social life, or work are often given. The party is a big affair, traditionally lasting for six hours. The parents, godparents, and often other families go all-out to make the party an absolutely over-the-top event. If you ever have an opportunity to take part in a quinceañera, I highly recommend it – it’ll be an experience you will always remember.

English:
Go, go, go,
Don’t lose your aim;
Because if you lose it
You will lose the path.