Posted in San Carlos Attractions, San Carlos Mexico Diving & Snorkeling, Things to do with Kids, What to Do? 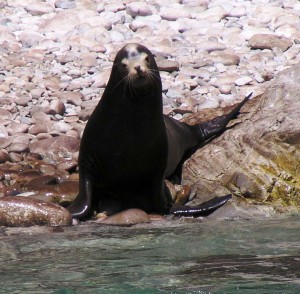 Discover beautiful and exciting San Pedro Island! Snorkeling & Diving with the Sealions at San Pedro Island is only 1 – 2 hours from San Carlos Sonora Mexico (depending on the speed of your boat).
San Pedro Island is a steep, rocky island covered in large cordon cacti on the upper slopes and a layer of white seabird guano on the lower slopes. Sea lions frolicked in the surf and sunned themselves on rocks.Even if you don’t want to venture into the water with the sea lions, watching them from the comfort of a tour boat is almost as rewarding.We were lucky enough to have a pod of dolphins swim alongside the boat and play in its wake. The chances of spotting dolphins on a trip to San Pedro are high as they often feed in the water between the island and the mainland. Sperm whales also often gather close to the island to feast on the large squid found in these waters.

The island is also an important seabird nesting site. During our tour, we saw flocks of Brandt’s cormorants, brown pelicans, brown boobies, and yellow-footed gulls. I was disappointed to not spot one of the blue-footed boobies that call this island home. Since the 19th Century, the mining of seabird guano at San Pedro has contributed to the local economy.

The island further contributes to the economy in numerous ways. The abundance of marine mammals and seabirds at the island attracts ecotourism. And the large quantity of fish around the island draws both commercial fishermen and private sport-fishermen.

In 2002, recognizing the importance of the island to the local economy and ecology, the Mexican government declared San Pedro Island and its adjacent waters an ecological reserve. The government is working with not-for-profit groups on restoring, protecting and conserving the island and the surrounding waters. The reserve has a “no take” zone of just over 11 km where fishing is not permitted, and a 290 sq km buffer zone where fishing is regulated.

Numerous companies in San Carlos offer boat tours to the island, many of which include diving, snorkeling and/or fishing packages. Among those in San Carlos are Sonoran Sport Center, Gary’s Dive Shop and Ocean Sports. 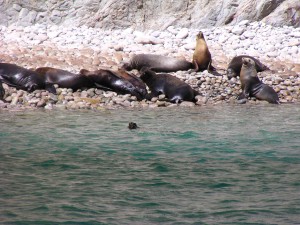 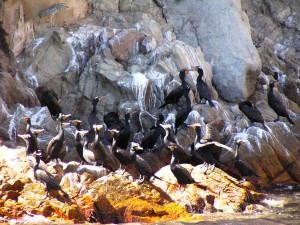 A great spot to snorkel, scuba dive, fish, kayak, or just go for a boat tour and nature watch.

Watch a video of Johan diving with the sealions