Día de Guadalupe (Day of Our Lady of Guadalupe), Dec 12 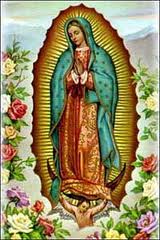 December 12 is the day of the Virgin of Guadalupe, Mexico’s patron saint. The Dia de la Virgen de Guadalupe became an national holiday in 1859.  It is an official national holiday, and is observed with pilgrimages, special masses, fiestas and feasts.

Tens of thousands of people will travel to Mexico City to visit the place where the Virgin appeared to the Mexican People. The holiday is a national fiesta that includes traditional music and fun attractions. Pilgrims bring presents to the virgin, usually bouquets of flowers while other visitors will perform dances and song for her. Some pilgrims walk on their knees on the stone street leading to the Basilica, asking for miracles or giving thanks to the virgin for a petition granted.

The vigil is the night before, on December 11, in churches around Guaymas. The biggest celebration will be in Santuario de Guadalupe Church on Blvd. Plaza las Villas (turn right off Garcia Lopez after Ley. Click here for map). There are masses at 8:00pm and 10:00pm and mariachi at midnight for las mañanitas (birthday song) to the Virgin of Guadalupe. There will be traditional food and drink at the fiesta.

In case you can’t stay up until midnight, you can watch a previous las mañanitas here …

History of the Celebration
The Story behind this celebration demonstrates how the Catholic faith gained importance in the hearts of the Mexican people. It is a story of miracles and faith which mark a change in the history of Mexico.

The Spaniards, after they conquered Mexico, had in mind the goal of converting the indigenous indians into Catholicism. But the Spaniards encountered many difficulties because the Mexican people had existing strong beliefs in their many gods. It wasn’t until the story of the Virgin of Guadalupe and Juan Diego that this started to change.

Juan Diego was a young indigenous Indian walking toward the Hill of Tepeyac on December 12, 1531 when he was stopped by the appearance of the Virgin Mary. The Virgin Mary appearing to Juan Diego was a young woman with black hair and dark skin which looked more like an indigenous person. She ordered Juan Diego to go to the Bishop and ask him to build a church at the Hill of Tepeyac. Juan Diego then ran to the Bishop to tell him what the Virgin Mary had told him. The Bishop didn’t believe what this young men was telling him and decided to ignore the petition.

The Virgin Mary appeared again in front of Juan Diego and told him to collect flowers from the top of the hill, but because it was December Juan Diego knew that there was not going to be any flowers at the rocky hill. Upon reaching the top of the hill, Juan Diego was surprised to see that it was covered with colorful and beautiful flowers. Juan Diego, as he was asked to, collected the flowers using his overcoat and ran again to see the Bishop.

Juan Diego gave the coat full of flowers to the bishop, and here the bishop discovered the image of Virgin Mary’s picture was miraculously traced on the coat. Seeing both the unseasonal flowers and the image of the Virgin, the Bishop realized Juan Diego had told him the truth and The Basilica of the Virgin of Guadalupe was built on the hill of Tepeyac in Mexico City.

Please note that all financial institutions will be closed on this day.