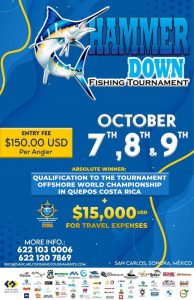 The Hammer Down is a 2 day, no kill, fishing tournament that has been in existence for over 30 years (first as the Cantina Cup, then as the Labor Day Tournament). This year it will take place from Friday, October 7 to Sunday, October 9.

The tournament is non-profit and has given thousands of dollars to local charities over the years.

The Hammer Down is a qualifying event for the IGFA Offshore World’s Finals and the winning team will be given an invitation to the 2023 World Championship.

The entry fee is $150 USD per angler. There is no boat entry fee. You can register online here. You can find the rules and more information here.

All participants are encouraged to bring your Captain and guest to the cocktail party and the awards dinner.

You’ll be able to follow the results in “Real Time” from the weigh scale on Saturday and Sunday. 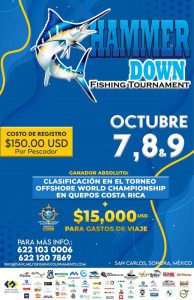 Find the Yacht Club on a map: 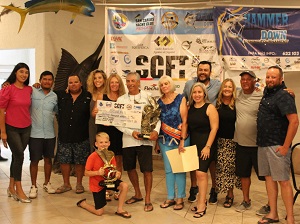 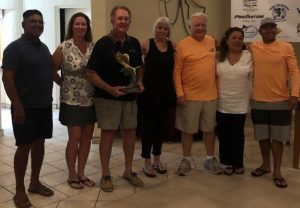 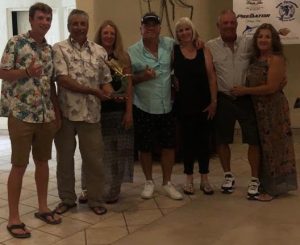 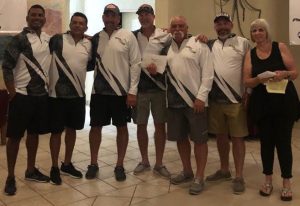 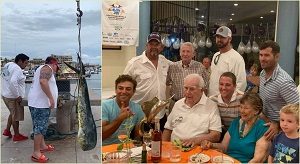 Here are the results:

The San Carlos HammerDown Fishing Tournament awarded local realtor, Diane Barroll, with the 1st Annual “Spirit of the Tournament” Award. Diane has been involved in every aspect of the tournament for 19 years. Congratulations and thank you Diane!

Photo of boats heading out on Day 1, by Susan Canale 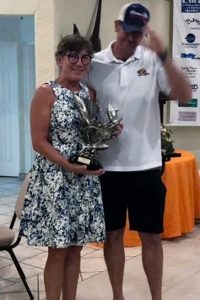 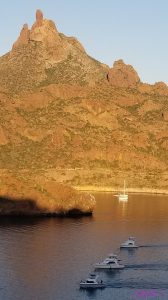 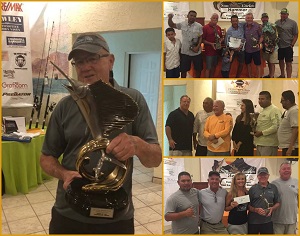 Seven billfish were caught by 54 anglers on 16 boats this past weekend at the San Carlos Hammer Down Fishing Tournament. Below are the results:

Congratulations to all the winners, and thank you to all the participants, volunteers, and sponsors. A special Thank You to Wade Earl, Tournament Director, who deservedly won the Spirit Award (pictured on right). 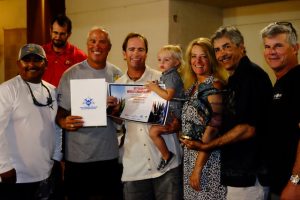 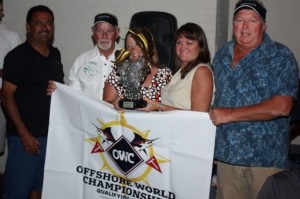 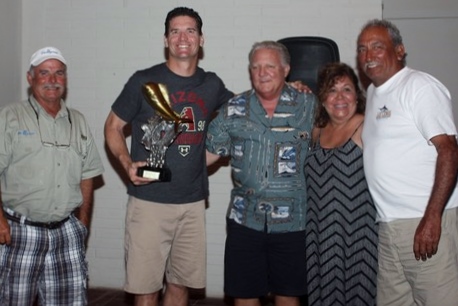 See more photos from the awards dinner here and photos during the tournament here. 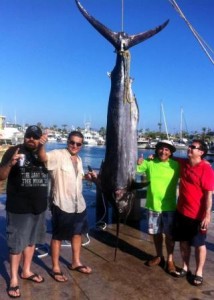 The ocean is warm in San Carlos, and the fish are here. Arturo was out with a group on Saturday and caught several small dorado and a 220 pound Blue Marlin, according to his estimate.

Only one dorado made weight in the annual San Carlos Invitational Labor Day fishing tournament, but it was a 50 pound beast caught by Telamon. There were twelve boats entered, and Rebel had the lead on Day 1 with three releases. It’s All Good had two releases on Day 1, and then caught four on Day 2 to take the lead. Some of the ‘regulars’ turned it on on Day 2. Day 3 saw Telamon mount a massive comeback and the win with eight fish to take home 1st place. It’s All Good and Predator tied with six fish for 2nd place. Behind them were Rebel and Kryptonite with five releases each.

Surprisingly, there was some good fishing for water this warm!

See all the entrants and results here. Proceeds from the tournament will be donated to local charities.

San Carlos’ 27th annual Labor Day Invitational Fishing Tournament took place from September 3 to 6, 2010. It was a great success with 100 anglers on 24 boats catching 102 billfish. Congratulations to all participants. Here are the results: