↓ Skip to Main Content
Home › Lifestyle, News and Real Estate › The story of Jeanne Socrates’ history-making sail around the world

The story of Jeanne Socrates’ history-making sail around the world

End of RTW via 5 Gt Capes

They say the third time’s a charm. That was definitely the case for Jeanne Socrates, a grandmother and retired math teacher from Britain. Aboard the S/V Nereida, Jeanne successfully completed a solo, non-stop, unassisted sail around the world on July 8, 2013, after leaving the harbor in Victoria, Canada in October, 2012. It took her 259 days. She was 70 years old at the time. This was her third attempt. The previous two attempts were halted by bad weather and equipment issues.

Jeanne and her boat are here in San Carlos right now. We met at Barracuda Bob’s last week to have a chat.

Jeanne first came to San Carlos two years ago, on a recommendation from some friends in BC who suggested that she come down here to make repairs on her boat. Over the last few months, Jeanne has been doing just that – getting much needed work done including a new rudder and most recently, installing new solar panels. She has been very impressed by the work completed to date at Marina Seca, and has made a lot of new friends in the San Carlos boating community. Jeanne’s “home” is the Nereida, a 38 foot ocean going sailboat, named after the “nereids” of ancient Greek mythology who were the handmaidens of Poseidon, so she is considered a “sea nymph”. 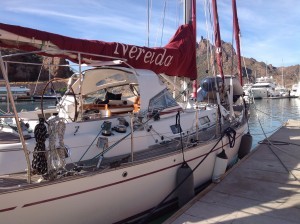 Jeanne explained the terms “solo”, “non-stop, and “unassisted.” She was alone on the boat. She could not land the boat. She could not get off the boat, and no one could come aboard. She could not use an engine. She had to stock enough provisions onboard to last for the entire 8.5 month voyage. She ate dehydrated food and lots of onions and potatoes. She learned how to make eggs last for 4 months by turning them over daily. Other than her many radio contacts, the only company she had were the birds that came close to the boat, including albatross, petrels, prions, and shearwaters. And the occasional dolphins. For 259 days!

If something broke, she had to fix it. “Either fix it or do without it”, she said. Somewhere off Tasmania, Jeanne had to climb the mast to repair a vital piece of equipment. While she was up there, there was a bit of swell that almost jerked her off the mast. Then there was the time the sailboat rolled over enough to knock loose the radar and wind-generation apparatus which kept her heater operating. She also lost use of her wind-steering rudder. When the weather eventually cleared, she was able to make repairs. She has had to repair everything on this boat. Steering. Electrical. Radio. She sailed for 6 months without a working wind instrument. That was something she couldn’t fix and was forced to do without.

A good day on the water for Jeanne is one with sunshine and 15-20 knots of wind. She has also seen her share of bad days, which includes stormy weather, continuously crashing waves, and cold temperatures.  She experienced a lot of this in the Southern Ocean (aka the Antarctic Ocean), where every 3 – 4 days saw winds of an average speed of 30 knots and 44 F temps. I asked if Jeanne ever got scared. She calmly replied, “I wouldn’t say I was afraid. Perhaps just concerned.” But she had complete faith in her boat. She knew the Nereida was sturdy and would stay upright, and that her bluewater cruising vessel was built to withstand the elements. And in times of “concern”, Jeanne would just focus on the most important things and do them first.

While Jeanne didn’t fish off her boat, on occasion the fish jumped right up to her. Once a squid landed on the Nereida, which made for delicious calamari rings. She remembers one morning when she awoke to 52 flying fish lying on her deck, which also turned into a few nice seafood dishes.

As an avid traveler myself, I was curious to find out which places Jeanne loved most, since she has now seen so much of the world. I was thrilled to hear that one of Jeanne’s favorite places to sail is our very own Sea of Cortez. Both John Steinbeck and Jacques Cousteau would likely agree. She also loves sailing in the San Juan Islands located between British Columbia and Washington State; up the shores of Alaska; and in the clear turquoise blue waters of the Indian Ocean near the islands of Reunion and Mauritius.

Jeanne uses one word to describe her secret to success: Determined. She was determined to do whatever it took to sail solo and unassisted around the world. And she did it.

Now that she has accomplished that feat, her next plans are to write about her experiences. She has been asked to write magazine articles for Cruising World, and will also write a book. Who knows – maybe Hollywood may even make a movie out of her story! Regardless, San Carlos is lucky to be a temporary home to such a remarkable woman, and on behalf of the entire community, “Congratulations Jeanne!”

For pictures and to read more about Jeanne’s exciting travels and her numerous accomplishments and awards received, visit www.svnereida.com. To contact her, email: svnereida@gmail.com. You can also follow her on Facebook.

Click here to see a CBC news clip from July 8, 2013 reporting on Jeanne’s record-breaking solo, unassisted sail around the world.