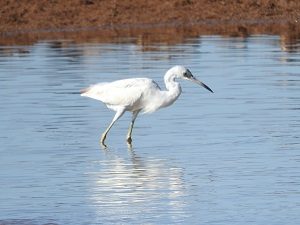 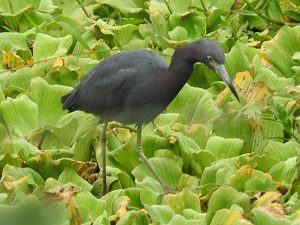 We had seven for our birding outing to Estero Soldado this last Thursday. A very respectable number considering how many of you have left for the season. We had nice viewings of Roseate Spoonbills, most of the Egrets and Herons, one American Avocet in breeding plumage, and American Oystercatchers. All the Spotted Sandpipers we now see actually have spots instead of their winter plumage plain white breasts. We were also able to entice a Mangrove Warbler into the open for a view of its lovely russet-colored head.

For the Bird of the Week, I decided upon the Little Blue Heron. The viewing we had this week was far different than the normal slate blue of the adult. That is because we saw a juvenile Little Blue and it wasn´t blue at all, it was white (pictured on left). As you can see from the photos, there is a big difference between the adult and juvenile.

The Little Blue Heron is one of my favorite herons and is a year-round resident here. It is petite compared to the other Egrets and Herons, and the blue is like no other. It is more intensely blue than the Great Blue Heron (pictured on right) which is actually grayish and it has a lovely blue bill that turns into black towards the tip. Some guides describe its color as slate, but the Cornell Lab of Ornithology allaboutbirds.org site describes it as “a small, dark heron arrayed in moody blues and purples.” Isn´t that a lovely description?

The white juvenile is about the same size as the Snowy Egret (black legs, black bill and bright yellow feet) and according to Cornell, “White little blue herons often mingle with snowy egrets. These young birds actually catch more fish when in the presence of the snowy egret and also gain a measure of protection from predators when they mix into flocks of white herons.” Our little guy, however, was all by himself.

We will meet this coming week as usual at Esterito Cafe on Thursday at 8:00am. We will be visiting two new locations.

As always, feel free to contact me at maryltannehill@yahoo.com
by Mary Tannehill