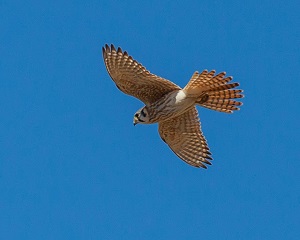 Today’s Bird of the Week is the American Kestrel. The lovely photo of a Kestrel flying was taken by Fred Gaunt on our Birding Group outing this past Thursday. The Kestrel is not a rare bird; in fact, it is the most common falcon in North America. You might wonder why I would choose it as the Bird of the Week.

Well, besides wanting to share Fred’s lovely photo, I also think it is always exciting to see a bird of prey. They are majestic even when they are not that big and the American Kestrel is the smallest of the falcons. Although they are migratory, the range map from iBird Pro shows Kestrels here in our area year round. The bird in the photo was seen on the road going to the Soggy Peso and the other restaurants on Algodones Beach. Sibley’s Guide says they hunt within a small range which would account for why we see one or two along that road every time we go.

The small size and the vertical stripes on the face are clues that it is a Kestrel. You might wonder what is the difference between a falcon and a hawk, and the answer is quite interesting. Hawks catch their food with the talons on their feet, and falcons catch their food with their beaks. Falcons are built for speed and have longer, narrower wings that they beat rapidly between short glides. Hawks’ wings are wider and they go slower, beat their wings less often, and glide longer distances. Hawks are also generally bigger.

We had 18 birders at last week’s outing to El Palmar settlement pond, the Paradiso mini-cactus forest and the Paradiso pond by the Soggy Peso. Lunch was at the always-delicious Doña Rosita’s at La Manga.

We will meet this coming Thursday at 8:00am at Esterito Cafe. All are welcome. Bring binoculars, hats and sunscreen.

If you have questions, you may e-mail me at maryltannehill@yahoo.com.