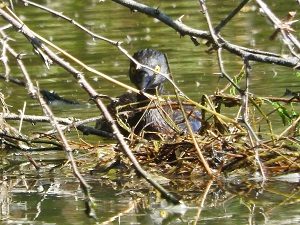 This past week we had 11 for our excursion. We visited two places including one we had not visited as a group before. First, we went to El Palmar to check on the Least Grebe nests that I had spotted earlier in the week. Unfortunately, the Grebes appeared to have deserted the nest and no eggs were seen. It appeared like something might have gotten to them. However, I am very happy to report that when I visited El Palmar today, I discovered a brand new addition to the Least flock. A tiny baby Grebe (pictured above).

The second location was a new one discovered by two of the mountain biking group and shared with us. I call this place Rancho Ojo because it is on the road to the Rancho Ojo de Agua. To get to it, you drive to La Manga and then take the road north and keep going towards the mountains. It is right on the road and is a cistern of water and a couple of grassy wet spots for the cattle that roam that area.

When the cattle are not there, the birds move right in. We saw many Northern Cardinals, Pyrrhuloxia, Hooded Orioles, Bronzed Cowbirds, Yellow Warblers, Verdin, etc. However we only saw the female of the beautiful bird I had seen two days before: the Western Tanager, my Bird of the Week. 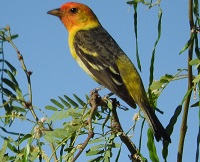 The Western Tanager (pictured on right is the male) is migrating through our area. They winter south of us and then move north – some of them as far north as the Northwest Territories in Canada. I like the way allaboutbirds.org described the bird. The author, Stephen Parsons, said: “A clear look at a male Western Tanager is like looking at a flame: an orange-red head, brilliant yellow body, and coal-black wings.” The WT is a mountain bird and lives in open woods all over the west. However, when it is migrating, Western Tanagers are less picky. They hang out in “forest, woodland, scrub, and partly open habitats as well as human-made environments such as orchards, parks, gardens, and suburban areas”, according to allaboutbirds.org. If you are trying to attract them to your area, iBird Pro says to try Safflower, Apple Slices, Suet, Millet, Peanut Kernels and Fruit.

We will meet this coming Thursday at 8:00am at the Esterito Cafe. The weather forecast is predicting a high of 94 degrees Fahrenheit, so bring sun protection and chairs. I have not decided where we will go but it’s possible we will hit the same places as last week since they were so productive and have shade.

As always, if you have any questions, please contact me at maryltannehill@yahoo.com.